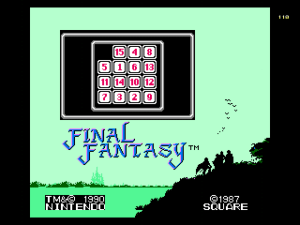 When you are on a ship, which you get pretty early in the game, press a and b buttons together 55 times and this slide puzzle game will appear. What you are supposed to do is put all the numbers in the right order. That is not very hard but isn’t easy either. As an addtion to that doing this extremely boring, pointless and sad. Why did Square ever bother? If you do ever finish it you’ll get an incredible amount of G – get this – 100!!

However, in the WSC version things have changed – you can set the game so that it gives you 10,000G. Which again is not OK, since it makes the whole game too easy (there is a huge resource of money). 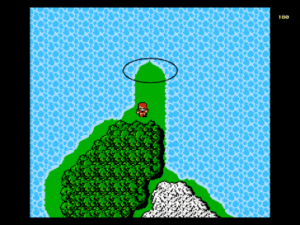 This is probably a bug in the game, but might be intetional. Who knows? What has happened is that the stronger monster from the continent that is located to the north were placed in this continent, that is on the last two squares, the circled bit, of this peninsula. This is a very good leveling up place early in the game, since the monsters there give good EXP and G. Either because Square could not admit it was wrong, or because this peninsula had become so popular, it is still found in the WSC re – release.

Please note that due to the way the game counts the steps to until the next battle, it is indeed possible to meet an enemy 1 step away from these two deadly steps (because when you cross borders from one enemy area to another, the game still counts your last step as if it were in the revious area). 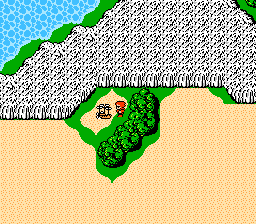 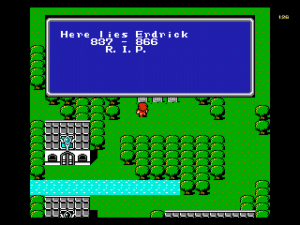 If you go to Elfland, then you would notice that there are three tombs at the east side of the town. Two of them are just ordinary ones, but on the third on there is “Here lies Erdrick” written on it. Erdrick is a character from Dragon Warrior, another popular game series. In the Japanese version of FF1 the tomb said “Here lies Link”. Link is a character from the Zelda series. 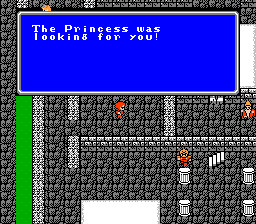 If you explore the floors of the Coneria castle you might run into something invisible: the invisible woman. Is she there because Square made a mistake? Or maybe they just put it there so that people like me can sit at their computers, wasting their free time, writing about this *mystery*. Anyway, this is how to see her:

Whenever you enter a room, you can see what is inside the room, but all the characters that are outside disappear. On the other hand, if you are outside the rooms, you can see everything on the outside, but nothing on the inside. So what has happened was that Square placed a character, woman, that can only be seen when inside rooms outside them. That’s why you can’t see her! But you should be able to see her when inside the rooms. Unfortunately there are no rooms near enough to her.

So, if you are using a Nesticle emulator, Go to the CPU menu, then go to ROM patch… Enter this Game Genie Code – SLZIAA, name it whatever you want and activate it. Every time you will open the menu and close it, your character will move down one space, no matter what space that is. If it is Ocean, he’ll move there. Now go into one of the castle rooms and use the code to move through the walls, like shown. Then just walk to her.

And there she is – the now visible woman! Now everyone else is invisible, though… 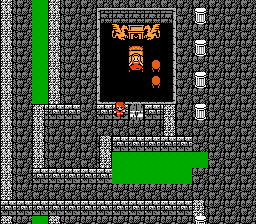 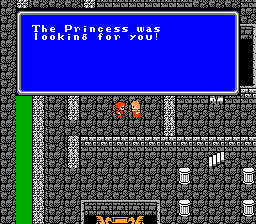