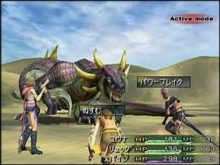 In addition, a brand new Attack Chain System is included in FFX-2. This system allows one of your character to chain attack an attack. Yuna’s Trigger command begins the Chain Attack. To conclude about the battle system, most players who haven’t played the game still wonders what is the main difference in battle between FFX & FFX-2. The main difference is, there will no longer be aeons or an overdrive/overkill system in FFX-2.