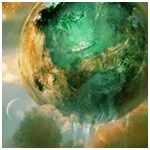 From her lofty seat, the world of Cocoon has long enjoyed tranquility. The interior of her spherical shell supports several sprawling cities and a population numbering in the tens of millions. Although a variety of dangerous beasts prowl the wilds, advanced technology and the protection of the world’s fal’Cie keepers ensure residents a peaceful and prosperous existence. Travel to the lowerworld of Pulse is forbidden, but given their deep-seated cultural fears of the place, Cocoon citizens would not even think to venture beyond the paradise they know. 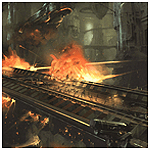 A relic of days before the War of Transgression, the Hanging Edge is located near Cocoon’s outer rim. The area was once a thriving urban center, but residents were forced to abandon the location when an attack by Pulsian forces cracked Cocoon’s shell during the conflict several centuries ago. It was since designated a restricted zone and, with civilian access prohibited, soon became nothing more than a name on local maps. 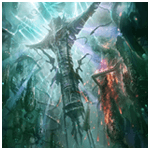 The fal’Cie sculpted Cocoon in antiquity, using resources harvested from the world below. When Cocoon’s shell was fractured in the war, they repaired it with raw materials again gathered from Pulse—buildings chief among them. Remnants of these structures, termed Vestiges, can still be found throughout Cocoon today. The centuries-old Vestige outside of Bodhum was believed to be nothing more than a harmless curiosity. The discovery of a Pulse fal’Cie inside its walls proved this false, however, leading to the detainment and subsequent Purging of countless citizens whose only crime was being in the wrong place at the wrong time. 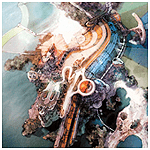 The modest city by the sea is the hometown of Lightning and Serah, as well as that of Snow and the members of NORA. Known for its relaxing, resort-like atmosphere, the location is a popular destination for vacationers.

Bodhum’s largest tourist draw is its annual beachfront fireworks display, but this year’s event was ruined by the discovery of the Pulse fal’Cie within the nearby Vestige. The Sanctum quarantined the city on the day after the discovery, announcing its plan to Purge Bodhum’s entire population, along with the hapless tourists, to Pulse. 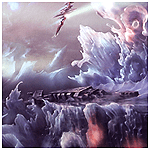 Lake Bresha is located near Cocoon’s outer rim, directly beneath the Hanging Edge. Once a bustling center of activity, this desolate area is now home only to monsters that lurk amongst the centuries-old remnants of civilization.

The final wave of power released by the falling Pulse fal’Cie has locked the waters of the lake in solid crystal form, creating a beautiful and unsettling landscape. 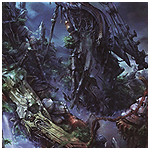 The Vile Peaks are built of debris—the castoffs of material originally lifted up from Pulse by the fal’Cie and used in the construction of Cocoon and later additions of landmass. These towering piles of refuse now serve as lairs for all manner of beasts, including lowerworld mechanical horrors that, intentionally or not, hitched a ride with what became the building blocks of Cocoon. The Sanctum military endeavors to clear out the dangerous inhabitants of the peaks, but some say they leave the job half done to discourage civilians from entering the lowlands. 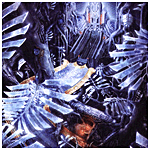 The Gapra Whitewood is the border zone that separates the wilderness of the Vile Peaks from the civilization of Palumpolum. Under the jurisdiction of the Sanctum military, the Whitewood serves as an experimental facility for conducting research into bioweapons.

The security of this classified area is built in the design—the paths winding through the trees are deliberately confusing, causing intruders to become hopelessly lost. 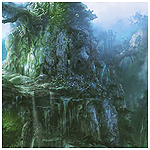 Off-limits to civilians, this unusual nature reservation is often visited by Sanctum officials engaged in ecological field studies. Research into the local ecosystem is conducted via climate-control mechanisms installed in the area. These mechanisms provide direct access to the fal’Cie in charge of manipulating weather conditions. 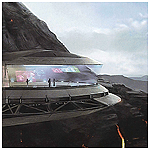 Euride Gorge is located near the town of Bodhum. The area is best knows for its energy plant, a facility whose output is generated by the fal’Cie Kujata.

Many school students can be found visiting the plant to learn about the role the fal’Cie have in society, but the gorge also see a large number of tourists who come to view the spectacular scenery.

Eight days prior to the Purge there was an incident at the plant involving Pulse l’Cie, But the details were suppressed to prevent civilian panic. 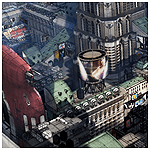 Hope’s hometown, Palumpolum is one of the biggest cities in Cocoon. Retail stores line the streets—a rarity in a society where online purchases are the norm.

With the goal of promoting their ‘hands-on’ approach to commerce as a tourist attraction, the local government actively encourages businesses to set up shop in Palompolum. 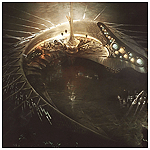 Centered around the ever-popular Nautilus Park, the ‘City of Dreams’ is essentially a giant fairground built by the Sanctum for the amusement of Cocoon’s citizens, Tourists visit from all corners of the world, keeping the city busy and bustling all year round. 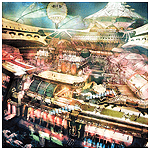 Nautilus Park is the crown jewel of the Sanctum-built City of Dreams. it houses numerous attractions constructed with the latest technology, but the true stars of the park are the chocobos and sheep found in the family-friendly petting zoo.

With the wilds of Cocoon crawling with all manner of vicious beasts, people find the presence of the docile park animals to be a rare and reassuring change. 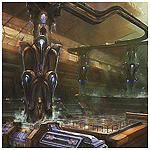 This Gran Pulse structure lies deep below the capital city of Eden, its existence unknown to the members of the Sanctum.

According to legend, Arks are Gran Pulse armories that hold living weapons in stasis, in preparation for war with outside forces. These facilities also supposedly serve the function of awakening a l’Cie’s latent powers.

Why this ‘Fifth Ark’ is on Cocoon, and whether there are other Arks hidden elsewhere, is uncertain. 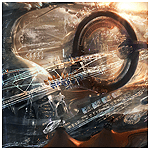 This city, Cocoon’s capital, shares its name with its fal’Cie patron. Host to the world’s centers of culture and government, it functions as the heart of human society on Cocoon.

At the city’s core rises the monumental Edenhall, seat of the Sanctum’s administration. The fal’Cie Eden dwells deep within the structure’s interior. 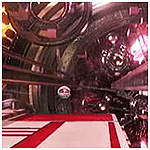 This is the dimension created by the fal’Cie Eden at the command of Barthandelus. The very structure itself is the true form of the being that sits at the center of Cocoon, overseeing the endless functions that keep the floating city running.

The sea of data flowing through Eden has materialized as physical matter, forming a shell that shelter the sleeping Orphan in a space that hovers between reality and dream. 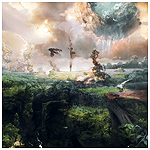 The savage world derives its name from that of the god Pulse. Its vast wilderness is populated by creatures ranging from the monstrous to the deadly, and its fal’Cie seem to have taken a decidedly less friendly approach toward human dealings than those of Cocoon, cultivating the land for settlement, but demonstrating little concern beyond that.

At one time in its history, Gran Pulse was home to a thriving civilization and many great cities. Now it is home to many great ruins, and people are nowhere to be seen. 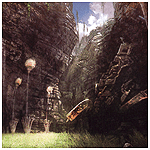 This is the area where Lightning and her companions set up camp after their escape from Cocoon and emergency landing on Gran Pulse.

The valley has been formed through great shifts in the earth’s crust and centuries of erosion, and scattered among its twists and turns are mechanical remnants of Gran Pulse civilization. Half-buried in the ground and overgrown with vegetation, these abandoned artifacts tell the tale of a fallen age. 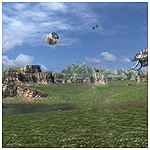 This great plain covers a vast expanse of Gran Pulse.

With an unobstructed view clear to the horizon, creatures can easily spot intruders into their territory. Perhaps this explains why so many beasts of the steppe are merciless predators—victors of the unending struggle for survival. 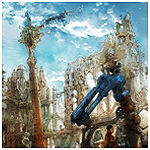 This mountain group stretches across a southern region of Gran Pulse. The area’s geography is diverse, consisting of scenic highplains, sheer escarpments, and deep fault valleys, with mammoth fallen trees a common sight across its landscape.

At the massif’s southernmost tip lies the ruin of the fallen city-state of Paddra. Once the flourishing center of an advanced culture, it is now nothing more than a Cie’th-infested archaeopolis. 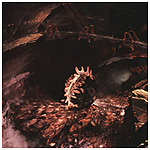 Mah’habara is an underground labyrinth of tunnels excavated by the fal’Cie Atomos. The advanced civilization of Gran Pulse once established mining operation here, targeting the mineral and ore deposits exposed by the fal’Cie’s digging. Long-abandoned engineering and excavation drones are now the only traces of human society that remain, the miners having disappeared long ago. 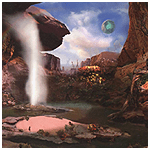 These subterranean springs rest within the mountainous northern reaches of the Archylte Steppe. A unique environment, the springs have spawned an equally unique diverse ecosystem.

The bioluminescent plants that line the waterfront represent a particular danger to unwary visitors. Their beautiful, ghostly plays of light often draw unsuspecting onlookers to the water’s edge, where the area’s guardian fal’Cie is quick to strike. 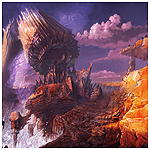 This towering spire was built by the fal’Cie in ages past. While the purpose of the structure is unclear, its original height suggests that the mighty beings sought to pierce even the heavens in their insatiable quest for expansion.

No matter the reason for its construction, the tower now lies in ruin, its great spine snapped, and its crumbling interior serving as a lair for the fal’Cie Dahaka. 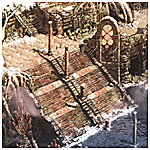 Fang and Vanille’s former home, the village of Oerba is located at the northernmost edge of the Gran Pulse mainland. Villagers from several clans shared a communal lifestyle here, honoring the fal’Cie Anima as their patron and protector.

Today, what remains of the abandoned village is overrun by Cie’th and in the process of being swallowed by an encroaching sea of ashen crystal sand dunes. 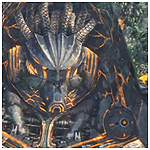 The Faultwarrens are a gauntlet of steep walls and deadly drops ruled by Titan, the fal’Cie believed to be responsible for managing the ecosystem of Gran Pulse. Creatures selected by Titan are pitted against one another in fierce battles with survival as their prize and predation the price of defeat.

Only the most formidable of creatures emerge from the Faultwarrens’ trials alive, but those that do so go with Titan’s blessing.