Now that you back aboard the Celsius it seems that the land is crawling with fiends and the Gullwings decide to become a clean up crew. Talk to Buddy and there will be three new hotspots on the map to travel to, Besaid Island, Kilika Forest and Bevelle where you just were. Pick Besaid Island.

When you land, Shinra and Buddy will take off to the town. Follow them there and enter the second hut on the right to talk to Lulu. She will tell you that Wakka and company have been fighting the fiends in the temple and you may want to clean up the leftovers.

Walk out of the hut and Shinra will be outside installing a commsphere. After he explains it, you will see Wakka and Beclem having an argument. Make your way into the temple and up the stairs. The mission begins after you finish talking to Beclem. Head through the door and through the hallways until you reach Wakka. Talk to him and you will hop on a lift that will take you down when you are done talking. Enter the next room and you will come across a large baddie floating in the center of the room. It is another Aeon like Bahamut named Valefor. 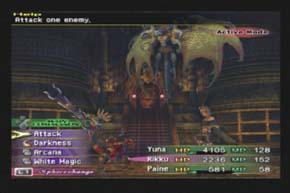 Valefor is a little tougher then Bahamut was with his almost 9000 hp. I used Machina Maw right from the start and had it trounce on Valefor’s head. Valefor has some deadly attacks such as the Energy Ray. It will slice across all party members for a good 400-500 hp each time. If you decide not to use the Machina Maw Sphere, then have two warriors or Dark Knights and one white mage.

Have the mage cast Shell and Protect right off the bat and have the other two girls hack away at Valefor. Eventually his ugly mug will take a dive into the ground and you will have beaten your second Aeon of the game. When he is beaten, you will have a conversation with Wakka outside and the mission will end.

Back aboard the Celsius, there are two more hotspots to check out. Next stop is Kilika Forest and the temple there.

When you arrive in the town, make your way all the way to the gate that will give you access to the forest where the temple is. The guards will tell you that they aren’t letting anyone through and that you have to go back. Head back through the village and go to Dona’s hut. Talk to her and she will tell you that she will distract the guards for you. When she does, there is still one more guard standing at the gate. You will be given the choice of waiting or rushing the gate. When you decide to rush it, you will need to play a mini-game to sneak through. 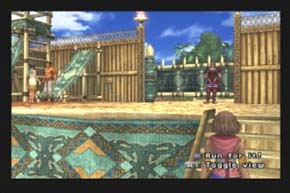 There are three guards at the gate but really only one you need to worry about is the one talking to Dona. The guard at the far left is of no bother and the guard at the gate will turn around when he opens the gate for a member of the youth league. The only one you have to watch is the guard talking to Dona. When the guard goes to open the gate, switch your view to him and wait for him to turn back around to Dona. When he does, run for it and you will be through. Pop open the chest on the other side to get a Bushido Lore accessory. When you start moving again, you will be spotted and Dona will tell you that there is a hidden path and to move across the tree tops. 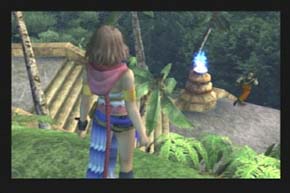 Make the first left and follow the path to where there are a few fires and a tree branch laying across the pathway above you. Walk to the side of the path and the girls will hop up and follow it along. Follow Rikku and Paine as they run ahead and you will reach the temple stairs. Make your way up them and through the courtyard and the mission starts as you head down the stairs. Save at the sphere in the right far corner of the room with all the machines lined up. Head up the stairs and step on the lift to go down further into the temple. When you reach the end of the next hallway, enter the door way and you will face some not so friendly fellows.

Daeva doesn’t really do all that much damage and mostly casts status ailments against your party. You should have no problems defeating him whatsoever. After he is dead, you will have a scene with Barthello as he professes his love about Dona. Head all the way back to the save sphere to save and then backtrack to this room again and enter the blue flame that blocks the door. Another Daeva will show up and he is just as easy as the previous one. Destroy him and the flame will extinguish. Make your way through the door way into the next room.

There will be three flames on each wall here. Walk up to the left and right walls and you will have to defeat a Daeva to put out each flame. When the two side walls are out, make your way to the north wall and defeat another Daeva. When the wall opens, head through and there will be two more Daevas waiting for you. Defeat them and go to the left and down the stairs. Grab the Samurai dresssphere from the floor of the lower walkway and make your way up the stairs at the end. Enter the door way for the show down with the boss. 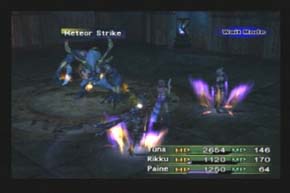 Another Aeon, oh boy! This big baddie can do some serious damage with his Hellfire attack to all party members but that’s about all he’s good for. His Meteor Strike attack is good for about 160 hp to one party member. He can be beaten simply by having shell and protect cast by the white mage and having the two warriors hack away at him.

Have the white mage cast cura when needed and pray every round otherwise. When he is defeated, you are back aboard the Celsius with one last destination to go.

You will get a distress call from Djose Temple and that is where you are to go next.

Make your way down there and head for the temple. When you reach it, the mission starts and you will receive the Al Bhed Primer XVI. As you enter the temple and make your way through the halls you can see a lot of electricity. That’s a good sign to use a yellow ring and any lightning protection if you have it. When you reach the lift, go up it and talk to the guard there.

If you thought the other bosses were tough then you’re in for a treat. This one is the toughest so far and does some major damage to you with its lightning attacks. The AeroSpark attack he casts does about 700 damage to one person in the party if they don’t have any lightning protection. Another attack it likes to do is the Thor’s Hammer attack where all 3 party members get hit for at least 500 hp each. Ixion is favorable to lightning so do NOT use reflect spell or else he will recharge his life every time he attacks you.

Use water attacks against him since he is weak to it and that will hurt him significantly. Considering he has over 12, 000 Hp this battle can be a long drawn out one depending on your level. Use the two Warriors or Dark Knights, your choice, and a white mage as usual.

Eventually he will fall and will leave you will the Soul of Thamasa and a long mushy cut scene will start. When you have control of Yuna again, walk around a bit and another scene will start which will eventually finish with you receiving the Crimson Sphere 2 and 3 and end the chapter.