Have a chat with everyone on the bridge and then make your way up to the deck to talk to Paine. After the scene head back to the bridge and another scene will play. You will receive Al Bhed Primer XXIII. Talk to Buddy to look at the map and he will tell you to check out Shinra’s new toy. Talk to Shinra and look at each commsphere that is set up.

When you look at all of them, talk to Buddy again and the scene will play and it seems your next stop is the MoonFlow to talk to Tobli. Talk to Buddy to bring up the map and to drop down on MoonFlow.

When you land the mission starts and you need to find Tobli. Head north and talk to the people along the way. It seems they are all looking for Tobli as well. When you get half way up the path, you will be stopped and asked if you have seen him and he will run out. Everyone will chase him and you will continue along the path. Keep going along the path all the way to the end where you will come to some people and a cart.

Everyone says they have given up looking for him, so continue along the path going west now. The next screen will have a save sphere and a guard will be told to go back and look for Tobli. Follow him back along the path and you will find Tobli as he runs away from you again. He will hop on the scooter and zip past you going north again. Turn around and start chasing him again back to the save sphere.

Now you can go west of the save sphere to the Shoopuf stand. Paine will talk to one of the Hypellos there and he will tell Paine that Tobli crossed not too long ago. Ride the Shoopuf across the river to the other side. Go west and then west again to come to two guards looking for Tobli. One will pound on a tree and when Tobli falls out he will run some more. Chase after him and when you finally reach the end Tobli will be waiting for you. After the chat with him and his Hypello friends the mission ends.

As Brother says, next stop Yunapolooza! Make your way to the cabin room to meet up with Rikku and practice your dance moves. Depending on how well you keep in time with Rikku and how quick you can press the button will determine what reward you get. I pretty much sucked at it so I got a pearl necklace. When you are done, head up to the bridge and talk to Buddy to head for the Thunder Plains.

When you land, it seems so me big bad monster has appeared and will eat all the spectators. Head north towards the red arrow on the map and there will be a Hypello outside the cave making you more scared. Enter the cave and there will be corridors leading east and west. The big dragon will be in the far north central corridor. You will be able to see him before you have to fight him, so feel free to explore the cave and open all the chests you come across. When you are ready for the boss shown down, hop over to him. 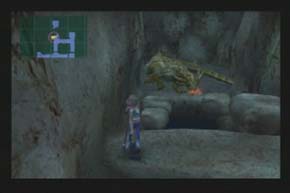 Here’s a big dragon monster that hurls fire attacks at you along with a crushing paw swipe. His Flame breath attack nails all three girls for about 200 hp each which is easily healed afterwards. His other attacks are what you want to try and watch out for. The Tail Smash is good for a hefty 500 hp against each girl and his swipe can knock one girl down 750 in a single blow.

Zalamander is weak against ice attacks so be sure to nail him with some blizzards in warrior sphere mode. Keep the white mage healing and eventually you will receive a Crimson Ring from him and a Black Ring from the chest he was guarding.

After you have beaten the dragon, make your way out of the cave and open any chests you missed going in. When you are back outside, head over to the Celsius for a long cut scene to play. After you are back inside, head back to the bridge and talk to the old man to learn more about Lenne. Talk to Buddy and he will tell you that something is up with the Leblanc syndicate and they are waiting in the engine room. Talk to Shinra and he will tell you that he has a signal coming from the commsphere he dropped down the hole to the farplane.

As he is telling you, Leblanc and company will enter the bridge as the scene starts. After the scene is over, the girls decide they are going to hop down one of the holes and finish this once and for all.