Aetherytes are a mystery to all of the people in Eorzea. Eorzea is the land that the Gods favored, and it seems that the people of this land flocked there because of the Aetherytes. They are valued by everyone and used as a way of everyday life. They truly are an asset. 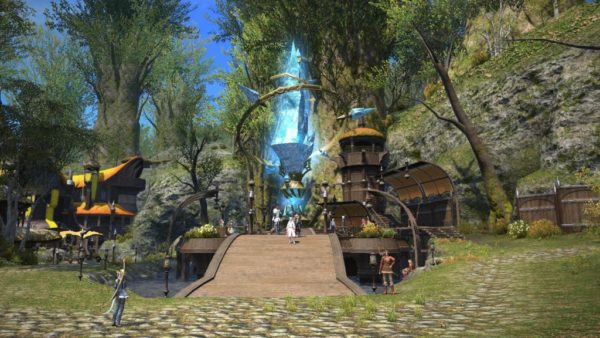 The history of the Final Fantasy XIV Aetherytes is as follows: No one knows where they came from, who made them, or how they got there. These special pieces of crystals seem to have the power to assist people in many different ways. The Aetherytes have been placed in multiple places around Eorzea. They can be found in many different locations and each will teleport people to different areas. During teleportation, the user turns into mist and is reassembled in the new zone. The Aetherytes also restore all HP (Health Points) and MP (Mana Points), act as a warping devise by setting home points, and allow the user to begin any levequests in his or her possession from that area.

The Final Fantasy XIV Aetherytes can be found inside cities and in field areas. The citizens have given them names; La Noscea Aetheryte, Thanalan Aetheryte, The Black Shroud Aetheryte, Mor Dhona Aetheryte, and Coerthas Aetheryte. Once a character touches an Aetheryte for the first time, that crystal is added to a teleport list allowing the user to teleport to that crystal any time in the future. An interesting fact about these crystals is that as long as the leader of a party has accessed the crystal, the whole party can teleport with him or her even if they have not touched the crystal.

Even though the Aetherytes are mysterious, they do not seem to pose a threat to anyone. They are helpful crystals that all players should locate and learn how to use to their benefit. These crystals can make traveling through the lands very convenient.