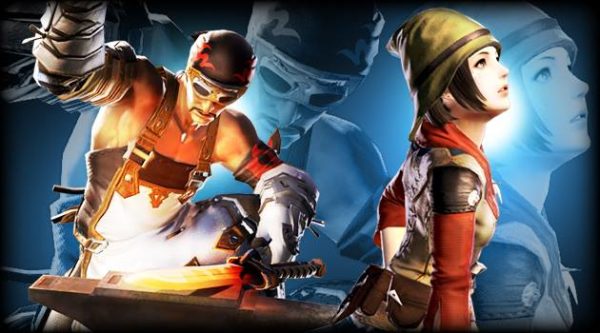 The Disciples of War are the front line damage dealers of Final Fantasy XIV: A Realm Reborn. Players looking to cast spells or craft items should look elsewhere because the Disciples of War are all about using their advanced weapons and skills to deal direct physical damage to the enemy. In order for players to maximize both their durability and damage, Disciples of War should focus on Strength, Dexterity and Vitality as their main stats. With enough experience in these classes, a player can branch out into more advanced jobs like the Bard or the Dragoon.

Gladiators are the primary battlefield controllers of the Disciples of War. They specialize in using one-handed weapons like daggers and longswords to dispatch their enemies, and using shields to help mitigate damage to themselves and their allies. Though a Gladiator cannot inflict large amounts of damage on the enemy, they are unmatched in protecting their more vulnerable allies. Read the full FFXIV Gladiator Guide.

This class uses their powerful fists to get right into the middle of a fight and deal damage. Pugilists use their exceptional speed to maintain a very high amount of damage per second on their enemies, and instead of absorbing damage like other classes, they try to dodge and evade damage as much as possible. The Pugilist’s skills are primarily offensive, though they do have skills that allow them to heal themselves in the heat of battle. Read the full FFXIV Pugilist Guide.

The ranged damage dealers of Final Fantasy XIV. They use their bows to deal quick and consistent damage while staying on the outskirts of a battle. Archers are weaker than some of the other Disciples of War, but they make up for this by using their mobility to avoid damage. An Archer’s skills are primarily offensive, though they also have a limited ability to buff their allies as well. Read the full FFXIV Archer Guide.

The consistent mid-range damage dealer class of Final Fantasy XIV. A Lancer focuses on heavy damage to the enemy without having to get too close. Because Lancers are almost exclusively focused on dealing damage, they have very few defensive skills which can make them susceptible to a focused attack from the enemy. Read the full FFXIV Lancer Guide.

The Marauder is the toughest front and center fighter not only in the Disciples of War but in all the classes Final Fantasy XIV has to offer. They have a wide range of defensive skills that allow them to draw attention away from their more vulnerable allies and to turn some of the damage that they are dealing into health for themselves. The Marauder is perfect for players who want to protect their friends and be the center of the battle. Read the full FFXIV Marauder Guide.

When it comes to choosing a combat-oriented class in Final Fantasy XIV: A Realm Reborn, players must choose between a Disciple of Magic or a Disciple of War. Disciples of Magic are the magicians and spell casters of the game. There are three different classes that belong to this group:

Conjurers are the first healing class in FFXIV: ARR and can eventually advance to a White Mage. They are attuned with the natural elements and can cast healing and support spells as well as offensive air spells, water spells and earth spells. While they are a healer, they can still go solo decently well.

The Conjurer class begins in Gridania. They are highly sought after in dungeons due to their healing abilities. Read the full FFXIV Conjurer Guide.

Thaumaturge class is capable of the most dangerous elemental spells in the game. They are a master of fire, lightning and ice and use each element with a destructive force that makes them a little vulnerable when soloing but quite brutal when in a group.

Thaumaturges begin in Ul’dah and can eventually advance to become the iconic Black Mage. They are a pure damage dealing class. Read the full FFXIV Thaumaturge Guide.

Arcanist is a caster who is very flexible. They are capable of a wide variety of damage spells including damage-over-time abilities and spells that cripple their enemies with status effects. They also have support abilities and the ability to summon a pet to control– the Carbuncle. The Carbuncle is a healing pet. This combination allows Arcanists to help out a group in a variety of ways.

Arcanists begin in Limsa Lominsa and can advance to either Summoner or Scholar. They are primarily a damage dealing class, but can also support a bit. Their advance job choices allow them to either heal or DPS. Read the full FFXIV Arcanist Guide.

Disciples of the Hand

The Disciples of the Hand are the Eorzean creators of items from elemental crystals and elemental shards. They work together with Disciples of the Land, relying on their items to form new materials. They can process in three different ways. Standard brings average quality and quantity; Rapid increases quantity but lowers quality; Bold lowers quantity and increases quality. There are eight different Disciples of the Hand in Final Fantasy XIV: Armorer, Blacksmith, and Culinarian in Limsa Lominsa; Weaver, Goldsmith, and Alchemist in Ul’dah; and Leatherworker and Carpenter in Gridania.

Armorers utilize Blacksmiths’ and Goldsmiths’ items to create new types of armor. They can also form Ingots out of raw elements and save them for future projects. When Armorers reach rank 10, they have the ability to use Binding Speed to improve their ability with Rapid processing. The Armorer’s two weapons are the Weathered Doming Hammer and Bronze Pliers. Read the full FFXIV Armorer Guide.

Blacksmiths make bladed weapons and pieces of items that will be utilized in future projects. Once they reach rank 10, they have the ability Maker’s Muse, which improves their Standard processing. The two weapons used by the Blacksmith are the Weathered Cross-Pein Hammer and Bronze File. Read the full FFXIV Blacksmith Guide.

Culinarians create food that offers boosts to players. At rank 10, they gain the ability Harmonize, which lowers the risk of crafting projects. Culinarians’ two weapons are the Weathered Skillet and Bronze Culinary Knife. Read the full FFXIV Culinarian Guide.

Weavers craft armor and outfits for mages and others out of cloth. When they reach rank 10, they gain Masterpiece, which increases Bold processing. Weavers’ two weapons include Maple Spinning Wheel and Rusty Needle. Read the full FFXIV Weaver Guide.

Goldsmiths use metals and gemstones to create new and powerful accessories. Their ability at rank 10 is Epiphany, which increases the quality of their crafts. Goldsmiths’ weapons are Weathered Chaser Hammer and Mudstone Grinding Wheel. Read the full FFXIV Goldsmith Guide.

Alchemists wield the Weathered Alembic and Bronze Mortar to bind items together, change colors, and mix magic potions. They can Preserve at rank 10, which keeps up good working conditions. Read the full FFXIV Alchemist Guide.

Leatherworkers create armor and clothing out of animal hides. At rank 10, they can use Fulfillment to increase the rate of success. Their two weapons are the Weathered Head Knife and Bronze Awl. Read the full FFXIV Leatherworker Guide.

Carpenters create tools and other items from wood with the Weathered Saw and Bronze Claw Hammer. At rank 10, they gain Tender Touch, which allows them to decrease lost durability. Read the full FFXIV Carpenter Guide.

Disciples of the Land

Miners roam the rocky hillsides looking for raw ore nodes to harvest using a pickaxe. After mining ore nodes, Miners can find ore deposits, gems and other rare materials. The gathering system allows Miners to find some especially rare items in this manner.

Miners harvest goods that are used by all of the crafting classes in the game, but especially Armorers, Blacksmiths, Goldsmiths and Alchemists. To become a Miner, talk to the Guildmaster in Ul’dah. Read the full FFXIV Miner Guide.

Botanists are guardians of the natural world and know about every plant and tree that grows on the hillsides and in the forests. With an axe in hand, Botanists chop down trees and harvest wood and other rare, plant-based materials.

They gather materials that are used by all of the crafting classes in the game but especially Carpenters, Weavers, Culinarians and Alchemists. To become a Botanist, talk to the Guildmaster in Gridania. Read the full FFXIV Botanist Guide.

Fishers are called to the lakes and oceans and spend their days relaxing on a dock with a fishing line in the water. They catch many different varieties of fish including some types that are quite rare.

The fish that Fishers catch are used by most of the crafting classes in FFXIV: ARR, but Alchemists and Culinarians have the most uses for fish overall. To become a Fisher, talk to the Guildmaster in Limsa Lominsa. Read the full FFXIV Fisher Guide.