Disciples of the Hand – Alchemist 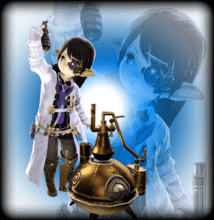 Alchemist possesses the ability to turn many overlooked and seemingly useless materials into liquid game changers. They constantly straddle the fence between nature and science, always striving to extract the greatest potential from each. Building on herbalist and occult techniques, their creations can bring destruction and restoration alike.

The Alchemist class in FFXIV is able to be leveled up to a skill level of 100. Players can obtain this skill level by collecting items throughout the game and crafting individual alchemy items. The speed of leveling is dependent on the player’s ability to collect the items for the recipes. This class pairs well with the gathering job of Botany or Mining as many herbs and minerals are thus would considerably lessen the burden of in-game costs for materials. The Alembic primary tool and the Mortar secondary tools are exclusive to the alchemist class.

The Alchemist can create many items that augment a player’s stats and abilities. Such as the Mega potion which can be created at level 43 of Alchemy. This potion instantly restores a portion of HP to the player. In addition to the basic mega potion there are multiple potions available to modify base stats for a short period of time. Examples of this include Mega potion of Strength which is useful for any damage class, Mega potion of Intelligence is useful amongst caster classes such as the Black Mage, Mega potion of Dexterity, useful to any non caster pairs especially well with the Archer class.

Alchemists have a variety of utility potions that afflict other players such as silence, paralyze, and blind. In addition to potions, Alchemists also boast the ability to craft wands for conjurers and white mages, making them good to pair Alchemy with.

Though Alchemy can result in a very lucrative pastime, the materials required to craft the higher end items are expensive and at times hard to collect. Many players begin working on another profession after obtaining level 60 of Alchemy as a steady income can be made from the lower level items and other professions offer more ease in obtaining the maxed out level.