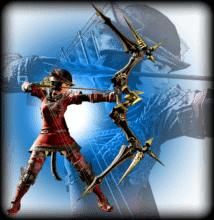 Archers are masters of the bow and arrow. There are two groups: military-trained longbowmen and short bow-wielding hunters. Archers carefully assess every battlefield and position themselves on the most advantageous ground. Likely, their enemies will be defeated long before a counterattack can be mounted.

The Archer class in FFXIV: A Realm Reborn is a Disciple of War. It is one of the classes you can start the game with, and the only ranged DoW currently in the game. A fighter with high dexterity and piety, Archers are a perfect match for the Elezen Wildwood race, the Mi’Qote, or any race that starts with a high dexterity stat. As a ranged fighter, the dexterity stat is the most important, as the only ranged damage statistic. Piety is important for anyone who wants to play as the Bard, and like most classes, vitality should be leveled up if you want to play solo.

The Archer has mainly offensive abilities, increasing in potency with leveling. They can also use a few evasive skills, like Shadowbind, as well as a couple supportive skills like Swiftsong. In the higher levels they can use some elemental attacks. Cross-class abilities include a handful of attacks common to all DoW characters, as well as Hawk’s Eye and Quelling Strikes. An Archer can also move around while casting abilities, making them efficient solo or in a group.

The only advanced job an Archer can become is the Bard, who gains a few supportive skills and no special traits. In addition to the Archer skills and five job-specific skills including Battle Voice and Rain of Death, the Bard gains some Conjurer and Thaumaturge skills. Like all advanced jobs, the number of cross-class skills drops from 10 to 5. The playstyle remains mostly the same, with an emphasis on supporting your party’s damage capability.

Archers are meant for dealing huge amounts of ranged physical damage, and depending on your playstyle, can level up pretty quickly with a good starting dexterity statistic. An Archer can chain multiple abilities into combo, and can rely on good positioning to pull them off, making them sometimes tricky in groups, but great for dishing out multi-target damage.