Disciples of the Hand – Carpenter 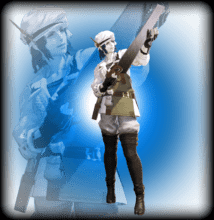 When botanist brings in the wood, carpenter goes to work. Using their knowledge of the strengths and weaknesses of all types of woods, they are able to craft beautiful and useful items. They create tools for combat, trade items, and buildings themselves.

In Final Fantasy XIV: A Realm Reborn, the class system has been shaken up compared to early Final Fantasy installments and indeed, many similar MMOs. This time, classes have been expanded to include the crafting or gathering “jobs”, giving them more usefulness and helping to create a robust economy on top of the traditional fighting part of MMOs. Carpenters are part of the new Discipline of Hand, along with Blacksmiths and the other crafting jobs that those who played FFXI may be familiar with.

The Carpenter class can interface with almost all job types, and some of the skills of other jobs will come in handy when trying to get raw materials or journeying to new areas. Each DoH (Disciple of Hand) class can borrow 21 abilities from other classes, meaning that dabbling in other crafts can help to make the Carpenter’s items much better. The Weaver job class has an ability called Careful Synthesis, which increases efficiency and progress in synthesis. These in conjunction with Carpenter skills like Basic Touch and Standard Touch can create higher quality items with less failures. As for Discipline of War classes, Lancers, Archers, and White Mages work well with Carpenter skills. Carpentry is needed for weapons or ammo in these cases, i.e. Lancer Arms and Conjurer Arms.

With the amount of interaction each class needs to have, the earning potential for Carpenters is fairly high – they make weapons as well as tools for other job classes. For the most part, Carpenters need to source material from Botanists and Blacksmiths in the form of Lumber and rivets, respectively. Their output is essential to a number of other classes (for instance, they make the Grinding Wheel for Goldsmiths and the Spinning Wheel for Weavers). The Carpenter class is a good choice for efficiency and support.