Disciples of the Hand – Blacksmith 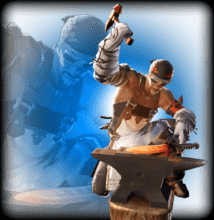 Blacksmith is rarely at a loss of work in the realm. Using ancient metallurgy and forging techniques, they craft deadly weapons and practical tools for use everywhere. Recently, firearms have come into great demand and many smiths find themselves opening up to a whole new line of work.

The Blacksmith class has proven to be very popular among players within the FFXIV universe. They are one of the most in-demand classes, because they can provide a variety of useful functions to help augment other players out there. They are commonly seen in many cities across the Eorzea realms. Many groups will want to include a blacksmith, since they can help repair many of their different items. They can even forge improved weapons that will feature essential stat upgrades. This is why the Blacksmith class is considered to be so valuable. Read through to find out some more jobs and uses that blacksmiths have within the the FFXIV game.

Many people will enjoy the fact that the Blacksmith class can enhance the amount of loot that you get from different finds. Their natural talent for metallurgy will help players gain currency faster, maybe faster than the Goldsmith, which can be used to buy a number of different goods. This makes them a top choice to enhance the strength of guilds or small groups that are wandering around the Eorzea realms. There have even been some Blacksmiths who have become capable of producing gun smithing. These guns are an advanced technology in the game that may prove useful for different classes that are out there.

When they engage in a battle, Blacksmiths can prove to be more than capable of holding their own. They have a natural tendency to weaken the armor and metal coatings of enemies that you may face. This can help reduce the defenses of an enemy and make them more vulnerable to attacks. Many Blacksmiths will find that they can level up quite easily due to having many different functions. They can also find most of their own ingredients, which makes them self-sustaining and capable of operating on their own.