Disciples of the Hand – Culinarian 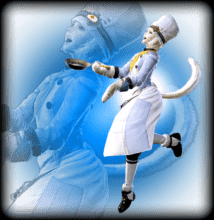 Culinarian prepares concoctions of a different sort. They are skilled artisans with regard to Culinarians have mastered cooking techniques the realm over and wish only to please with their products. Perhaps, most importantly, they are responsible for keeping up the strength of warriors in combat situations.ffxiv Culinarian

The Culinarian Class in FFXIV is a Disciple of the Hand, which means it is not a combat class. However it is the most general of the crafting classes, and any other class can become a chef, making it a good choice if you want to add crafting skills to a non-craft build, or simply build a well-rounded support character.

In FFXIV, the Culinarian has eight abilities, some of which are simply upgrades to previous abilities. Only one of these abilities, acquired at level 15, is unique to the Culinarian; most crafting classes share the same skill set. Basic Synthesis improves crafting progress, Basic Touch improves quality, and Master Mend restores Durability. Observe is the only ability not directly related to crafting; it allows the character to wait one round. The Culinarian is the only class to gain the Hasty Touch ability, which increases quality at no CP cost and is gained at level 15. FFXIV: A Realm Reborn adds six skills to this list, such as Great Strides, which doubles efficiency of Touch actions, and Reclaim, which allows you to reclaim materials from 90% of failed crafting.

As a Disciple of the Hand in FFXIV: ARR, a Culinarian can also use cross class abilities. That means the Culinarian can borrow 21 abilities from the other DoH classes, provided you unlocked them with a character of that class. This includes Tricks of the Trade from the Alchemist class, which restores 45 CP; the Brand ability for all six elements, which doubles your progress for corresponding recipe affinity; and the Flawless Synthesis of the Goldsmith class, which increases your crafting progress with 90% efficiency.

Culinarians craft consumables, including Battle Food, Crafting Food, and Gathering Food. For a Culinarian to create these items, they need ingredients from all gathering classes. While this can limit your versatility, high-level crafted food beats vendor-bought food in the upper levels of the game, so while a Culinarian may not be the most versatile class, they can be key to the power necessary to defeat end-game content. Any other class at level 10 or above can become a chef, so you can acquire these skills at almost any point in the game.