Disciples of the Hand – Armorer 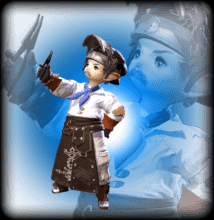 The armorer is to armor as the blacksmith is to weapons. In fact, they used to fall under the same title, but progress in the craft has led to specialization. Armorers excel in piecing together strong, flexible metal armor and shields capable of withstanding the toughest of battles.

Armorers are one of the more interesting supporting classes in “Final Fantasy XIV.” They can take a wide selection of elements and material. Aparting from leatherworker, the armorer can craft pieces of armor for other characters. Armorers are a great class for somebody interested in making a lot of in-game cash.

The Armorer, like all “Disciple of the Hand” classes, cannot upgrade to a new job. Instead, the class is a job into itself. As a result, the Armorer is highly specialized in a way that combat classes are not. They can craft 139 different items, such as head gear, leg gear, necklaces, rings, new tools, and full sets of armor.

Armorer skills focus around crafting, repairing, and upgrading armor. For example, the “Basic Synthesis” skill increases the progress of your armor, while “Basic Touch” increases its quality. Other skills include “Mend” which boosts armor durability by 30 points, and “Steady Hand” which increases action success rate by 20% temporarily.

You won’t have to worry much about combat or defensive stats with the Armorer. Instead, focus on crafting stats such as “blacksmithing” and “metallurgy.” You will also want to focus on improving physical strength, as well as steadiness. Improving your strength and steadiness will help you make stronger, more alluring, pieces of armor.

Making money with the Armorer isn’t difficult, but players will have to be patient. You will have to go on quests to find the items necessary to make armor. These quests can take a long time. Once you have built some armor, you’re going to have to try to sell it. Schmoozing with other players will be a necessity, as will knowing how to entice buyers. Once you have a solid group of customers, you should be making money in no time.