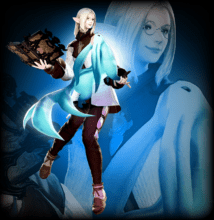 Using symbols found within occult grimoires, the arcanist defines and casts powerful spells. In the same way a thaumaturge’s stone works as a medium for inner aether, arcanists use these symbols based on ancient geometric techniques. They use the same techniques with gemstones to conjure the familiar, Carbuncle.

The Arcanist is a tough, powerful magical class in the upcoming “Final Fantasy XIV,” that has a lot of advantages for a player that is interested in a magic-centric, tank-like gameplay style.

There are two different “jobs” available for the Arcanist: the Summoner and the Scholar. The Summoner is able to summon beasts, known as primals, to fight alongside and for him. Summoners are essentially “tank” characters, or those that exist to deal and take a lot of damage. The Scholar is a magic expert that focuses on controlling fairies. Scholars offer more of a “support” role for the party, content to heal the fighting members of the party, and boost their stats from a distance.

The basic Arcanist has a wide skill set, one that encompasses a wide range of magical disciplines. Their most basic attack is “Ruin,” that delivers magic damage of 100. “Bio” is another basic Arcanist skill that delivers damage of about 10. Arcanists also have access to long term damage spells, such as Miasma, which deals five damage each turn.

Focus on your basic magic stats, as well as spellcasting, debuffing, damage, strength, and defensive stats. Consider boosting all stats associated with resistance to magic and physical attacks. The Arcanist with increased resistance to damage will be a nearly unstoppable tank.

The Arcanist is a great support character for PvP combat. If he is a Summoner, he can expect to be at the front of the party, summoning vast armies of beasts, and absorbing the most powerful attacks from opponents. As a Scholar, he’ll be in the back, healing tank characters, and casting offensive stat boosting spells. Leveling up quickly is possible with the Arcanist only if they stick with their basic skill set.