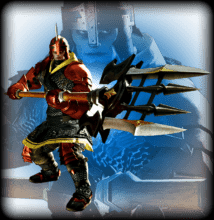 Using polearms of all types, lancers excel at keeping their enemies at a distance while unleashing a storm of strikes. Traditionally, lancers used longspears, but as of late, they have become masters of the the halberd and trident. Be sure that whatever they are brandishing, it is lethal.

The Lancer class is a group that specializes in the utilization of long weapons, such as spears and pole arms. With this form of combat, they are also able to use a large number of weapon combinations, although they do tend to have a lower HP than other weapon classes, not to mention it is not possible to utilize methods to improve the defense of the class.

In order to become a lancer, it is possible to do so by starting out as the specific class, or by joining the Lancer Guild once level 15 is reached. The Lancer Guild is located in New Grindania, and the best Lancer races are the Hyur Highlander and the Roegadyn Sea Wolf.

Some jobs available for a Lancer to earn value and build XP easier is to become a leatherworker, carpenter or a botanist. There are some jobs that require you to be a Lancer in order to take up the specific job. These include the Dragoon, which you must reach a level 30 to become, and Monk, which requires you to reach level 15. The best stat to build up when you are a Lancer is the STR, or Increase Damage option, although boosting the VIT, or HP Pool, is also important as well.

Most of the abilities of the Lancer class are thrust based, as the first six level ups for the class are all simply improvements and variations to a thrust. It is not possible to upgrade outside of the weapon options until level 18 is reached, at which point you have access to the Life Surge, which ensures critical damage for first non-magic attacks when the Life Surge is active, but you are able to absorb up to 20 percent of the maximum HP, although this only lasts for 10 seconds.