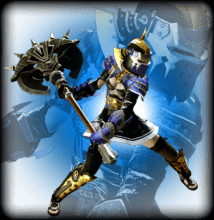 Marauders make use of one weapon: the greataxe. This weapon is commonly associated with the realm’s pirates. They are offensive menaces and extremely intimidating to even the fiercest of foes. Using brute strength, marauders quickly overpower both human and beast alike. They are quite at home against large crowds of enemies.

With one of the highest HP pools and damage-dealing abilities in the game, the Marauder class is the undisputed tank of FFXIV: A Realm Reborn. Wielding greataxes, Marauder characters are slow but powerful, and vast HP reserves help keep them out of harm’s way. Performing quests under the right conditions allow the Marauder class to become a Warrior as a job, which gives the character access to exclusive abilities, as well as cross-class abilities with the Pugilist and Gladiator classes.

A multitude of attack abilities with instant cast time and high power even at low levels make the Marauder class a relentless heavy hitter. In the higher level abilities, attack potency is combined with additional effects; Brutal Swing stuns enemies for three seconds, while Fracture adds damage over a period of twenty seconds, in addition to original damage dealt. The Marauder also learns useful support skills, such as Foresight, which offers a brief 20% increase in defense. Marauders also have skill affinity with a handful of abilities common to the Disciple of War classes, including Mercy Stroke and Bloodbath.

In addition to equipped abilities, the Marauder learns class-specific traits with leveling that are always active and do not need to be equipped. Enhanced Vitality and Enhanced Foresight are useful Marauder traits that continue to level up throughout gameplay. Unlocking the Warrior job by leveling up a Marauder allows the character to learn job-specific abilities with even greater power, such as the dynamic pair of Defiance and Inner Beast. A Warrior also has cross-class affinity with certain Gladiator and Pugilist skills.

The Marauder can be chosen as a starting class in FFXIV: ARR and the almost immediate gains in strength and defense can make early battles easier for quick leveling. As a good tank build, the most important stats for this class are Strength, which increases attack damage, and Vitality, which directly increases the HP of the Marauder character. Some Marauder builds place an emphasis on dexterity, but the most effective build is a classic tank. With a high starting Strength and Vitality and relatively low Intelligence and Piety, the Hyur Highlanders or Roegadyn Sea Wolves make great race choices for a Marauder character.