From now on, I will pick up the pace of the walkthrough. There is no longer a point of picking up every chest. The difficulties involved in getting weapons and armor for your fighters and red mage have long passed and you won’t need as much money as before. From this point, most weapons are useless. Also, if you made it here at LV13, then you are strong enough to finish the game without the need to level up.

First, go to the town of Crescent Lake. Take the ship south and then go east. Pass Elfland and keep on heading left, near the land. You will come to a port which seems to be in the middle of nowhere. Dock at the port and walk west until you come to Crescent Lake. The weapon/armor shops have nothing that will help you at this point, so use them to sell any stuff you might have received from the caves you’ve visited. The only thing you want from the magic shopis EXIT, but you need to be a Red Wizard first. Don’t forget to restock your stash of Healing Potions. Afterwards, talk to the circle of sages. 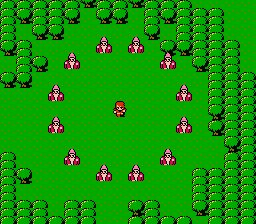 Pass between the Magic Shops and go right. Follow the path until you come to the 12 sages. As you talk to all of them, one will give you a canoe. Basically, they will tell you to kick the crap out of the fiend of fire. However, that’s not what you want to do right now. What you really want is the airship, so head for the Cave of Ice.

Take the ship to a port just north of where you are right now (use the river mouth as a port and then get into the canoe – saves a walk). Now, go to the river, and use the canoe to go left on the first junction. From here, go up, up, right, and left. At the next junction, keep on going left, then down. Finally, go at left at this junction and follow the river to a grassland. Keep on going and you will reach the Ice Cave. Use Tents to restore HP and save.

The Ice Cave has some very nasty enemies – the worst ones being FrGiants and FrWolves (FrWolves are dangerous only because they can come in groups of 6). Also, Sorcerers can kill you in 1 hit (If you have to, pickup from your save spot at the entry of the Ice Cave. You did use the tent to save, right?). The Cocatrices can petrify you; run if you encounter them. My suggestion is that you run from all the battles; there simply is no point as to why you should try to level up here – there are many better places.

Try getting lost – after all, you can go in circles…

This is the most difficult dungeon in the game – a complete nightmare for all Final Fantasy gamers. The maze here is very, very difficult. It is so impossible, that I won’t even cover it in my walkthrough.

Floor 2 (the other part)

In the room, there are two treasures you can reach: the one on the right side has a Flame Sword (equip it immediately!) that is not guarded. The other one you can reach is guarded by Mages (Actually, they are more like FrAstos, so they cast RUB) – you don’t want to mess with those guys (at least not yet, and the chest has a Cloth in it anyway). For now, just fall into one of the pits. 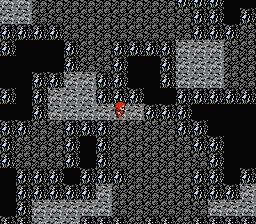 Finally, head left until you reach the stairs.

Floor 1 (the other part)

If you wish, you can get the Heal Potion and 10000 G from the treasure chests in that room. Walk into the next room and check out the chests; you’ll get 9500 G, a Tent, and an Ice Shield. Step onto the warp hole and you’ll be transported back to Floor 2.

Simply step on the square next to the treasure chest – time to fight the Eye.

Simply attack and pray that she doesn’t kill you with her one-hit-kill moves too quickly. Don’t bother restarting if some of your member die – this is expected.

Moving on, jump into another one of the warp holes and warp back to Floor 3. Next, walk back to Floor 1 like you did before, but this time use the stairs that are located there to get out of the Ice Cave (Note: if a party member is dead, it’s best to run away from all fights. This way, you won’t disturb the EXP distribution between your party members). Watch out for the wizards – you can’t run away from them!

Now that you have the Floater, head back to Crescent Lake. Revive any dead party member, restock on Heals, Save, etc., and take your ship for a ride to the desert southwest of Crescent Lake. Dock your ship at the river (use the canoe) and walk into the middle of the desert. Go into the items menu and use the Floater. An Airship will appear!

Now that you have the airship, have fun exploring the world a bit. On to the next chapter!