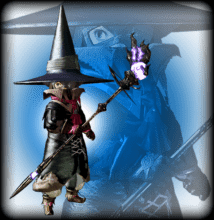 Black mages are the most feared and respected casters in the land. Infused with the sheer destructive power of spells and incantations, these mages have existed for centuries, capable of destroying vast armies with little more than a nod of their staff. As a black mage, you will be capable of wielding devastating magic attacks that can quickly turn the tides of any battle.

The Black Mage is an advanced job in FFXIV: A Realm Reborn. It is a potent magic-wielding job, capable of raining down death and destruction against all who oppose the Black Mage. Through the use of fire and ice based magic, this job can deal massive damage in a short period of time.

Players must first choose the Thaumaturge class within the Disciples of Magic tree. Then after reaching level 30, a specialized quest, called Hearing Voices, will become available. Completing this quest will grant the player an item, the Black Mage Soul Crystal, and access to the job.

Black Mages are heavy DPS, or damage-per-second, characters. By increasing intelligence and piety, the job’s two main character stats, players can increase their damage exponentially. Due to the nature of FFXIV’s race mechanics, there is only a minor advantage to choosing one race over another. Lalafell have the initial advantage within the Thaumaturge class, but by level 10 all classes have similar stats, negating this advantage.

The Black Mage is ideal for player versus player combat. The Black Mage is essential to any PvP group regardless of size. The Freeze and Flare spells are effective against both single and groups of enemies, and the Convert ability can triple the total amount of magic points for extra casts. They also possess two support abilities:

The path of the Black Mage is not an easy one. It takes time and patience to meet the job’s requirements. However, any player who chooses that path will be rewarded with a powerful and valuable character. There is never any shortage of questing or PvP groups searching for characters with this job.