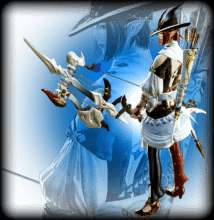 In Eorzea, the profession of a bard was one that developed through battle, courage and skill. These archers were responsible for not only reigning arrows down upon their foes with striking accuracy, but they also took on the role of chanting and singing to raise the foot soldier’s spirits. These musical archers were so effective that the power of their song grew to inspire and calm their companions, granting them incredible advantages over their foes.

A Bard’s job is simple: to create music that will inspire and motivate men in battle. To become a Bard, a player must first reach Archer level 30 and Conjurer level 15. In order to obtain the “Bard” soul crystal, one must complete the “A Song of Bards and Bowmen” quest. As a Bard, a player can play one song at a time, but if multiple Bards are gathered, multiple songs may be played.

Bards have abilities specific to them. Specific quests must be completed in order to obtain these abilities. The Ballad of Magi ability does not include any combos, nor does it cost TP, but the amount of required MP varies. This ability allows a player to restore MP to the members of a party within range. The recast time is ten seconds.

The Minuet of Rigor ability increases the accuracy of party members’ magical and physical actions. It also does not have any combos. The MP cost varies, but there is no cost taken from TP. The recast time is ten seconds.

Paeon of War increases the player’s party members’ TP within range. It costs 1000 TP but does not cost MP. No combos are available with this ability. The recast time is ten seconds.

Rain of Death attacks a specific target and the enemies in close proximity to it. This ability costs 3000 TP and 0 MP. Two combos are available: the action Quick Nock and the bonus Chance to inflict Stun. Quick Nock allows the player to attack enemies within a cone before you with a power of 110. Inflicting Stun upon enemies sends them into a paralysis state. The recast time for Rain of Death is 30 seconds.

Battle Voice increases the effect of Bard songs resonating while the ability is in use and raises the maximum HP level for members of the party. It costs neither TP nor MP and does not offer any combos. The recast time is 900 seconds.