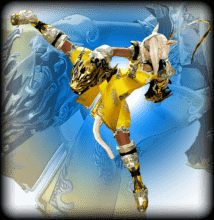 These combatants gain their power from their dedication to their order, the Fist of Rhalgr, and their devotion to its god, The Destroyer. These martial masters were some of the most feared in the mighty armies of Ala Migho, although this was long before the city-state’s occupation by Garlean rule. Their devoted worship renders them capable of extraordinary physical feats, making them a solid and reliable combat job.

Shoulder Tackle – A charge attack with the possibility of Stun.
Spinning Heel – Allows Kick in auto-attacks, but does reduce damage. Cannot be used with Hundred Fists.
Fists of Wind – Gives attacks the Wind attribute and increases speed, but does consume MP while in use. Cannot be used with Fists of Earth or Fists of Fire.
Dragon Kick – A twofold melee attack. Possibility of delivering an additional Sucker Punch. Possibility of rendering enemy without use of Weaponskills.
Hundred Fists – Temporarily increases auto-attack speed.

The Monk is a great Job for solo or group battling. With the right stats, the Monk can become enough of a power house that it can overtake almost any other Job with little difficulty, including Dragoons. In order to get the skills of a Monk, the player must undergo specific quests. After each quest is completed, the Monk will obtain another ability. These abilities are usable only with specific levels, such as the Shoulder Tackle is usable at Level 35. As the Monk is a type of Job, the process of leveling up the character depends on the chosen Class.

Whether in Player-versus-Player or Player-versus-Computer, battles are dependent on the skills of the player as well as the overall build of the character. If done right and the player at least has a minor knowledge of how to use each ability, the Monk is definitely a challenge to beat.