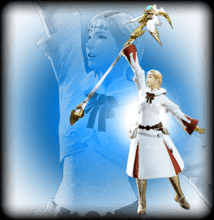 The healers of the realm, white mages developed their art over generations long before war and turmoil swept through the land. The art of succor, or white magic itself, has become all but lost in recent years as the dark hearts of man slowly tainted its powerful abilities. While the Padjal, those chosen by the elementals, strain to revive the practice and bring health and healing back to the land.

As many Final Fantasy fans may know, especially with Final Fantasy IV, a White Mage is a necessity for healing low health, curing conditions, and reviving fallen allies. As many may remember that Porom was the White Mage of the original FFIV, in A Realm Reborn, you are chosen to play in the MMORPG and may choose the class you prefer to work in. As a White Mage, you will find yourself as a vital asset to any team.

In Final Fantasy XIV: A Realm Reborn, you will choose the class of your choice and will level up with that class’s statistics. In this MMORPG, you gain experience points that allows you to level up and learn new spells. In order to obtain the White Mage Job, you must choose the Conjurer class to begin with. The weapons Conjurers and White Mages use are wands and produce healing spells and even the damaging spell called “Holy.”

In order to become a White Mage, you must level up as a Conjurer and Arcanist until your character is ready to be promoted to the White Mage job. After doing so, you will be able to level up and learn new and more usable spells such as Curaja, Essuna, Arise, etc. However this may be, not every race in the world of Final Fantasy XIV: A Realm Reborn are suited for this job. For the best results as a versatile White Mage, your best races to chose are either the Midlander Hyur or the Hellsguard Roegadyn.

In Final Fantasy XIV: A Realm reborn, the Midlander Hyur are referred to be the most cultured and educated race in the world, making them a great use for White Mages; however, the Hellsguard Roegadyn are also referred as masters of magic either as a Black or White Mage.