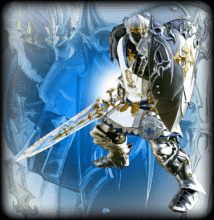 Paladin’s serve as the great protectors of a party, using their stalwart defenses to draw attacks and defend weaker companions. Their great defense and strength was originally developed by the Sultansworn – the personal bodyguards of the royal family of U’ldah. Their silver armor, steady shield work, and honed sword skills make these companions an invaluable choice for any adventuring group.

The Paladin job in FFXIV is a popular job in the game due to the ability to defend against damage from AOE or to inflict damage on one single target such as an end boss. In order to become a Paladin, a player must first obtain specific skill levels in the Gladiator and Conjurer classes. Once the required skill level has been met the player should obtain the “Soul of The Paladin” quest from the Gladiator’s Guild in Ul’dah.

Paladins inherit all the abilities and traits of the Gladiator class and also can use the cross-class abilities of the marauder and Conjurer. Paladin is usually the best choice of “tank” for group tasks in the game. The Paladin has an option to choose between two stances, Sword Oath or Shield Oath. Sword Oath allows the player to issue out considerable damage against a single target. The ability Shield Oath specifically issues out an increase in the potency of auto attacks by 50. The second stance known as Shield Oath is primarily used to issue out damage to AoE mobs in the game. When used, the Paladin is able to reduce damage received by 20% and increases enmity, while lowering damage dealt by 20%. The two stances cannot be used at the same time and are designed to allow different aspects of game play.

Paladins are a good choice to level quickly as the in-game costs are low as opposed to other jobs in game. Due to the many utilities available to the Paladin, it makes them a highly versatile PvP fighter. Paladin’s armor is considerably more effective as opposed to other jobs and it is also the most graphically stimulating. Their ability to sustain massive damage and put out significant damage makes them a foe to be reckoned with.