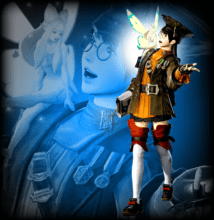 Scholars are the brilliant minds of Eorzea. History tells of how these adept academics used their intellect and their strategy to defend their small city-state of Nym, located on the Isle of Vylbrand. As a support job, scholars harness the power of spell-slinging faeries that can bolster allies and heal the wounded.

Despite a heavy rejection and problems with launch in 2010 of Final Fantasy XIV, the long-awaited launch of Realm Reborn has been announced and met with lots of excitement. Gamers everywhere are extremely excited to hear about the newest job set within the Final Fantasy Universe.

The required class for the Scholar job is the Arcanist, and it is believed that once the newest version is launched, you will be required to be a level 15 Conjurer and then an Arcanist in order to make it to Scholar. The Scholar him/herself, joined by a “familiar” or pet in battle, are super summoners, summoning tank and casting pets alike to help them in battle as well as being able to cast healing over time spells and awesomely brutal and sneakily effective spells on their enemies like poison and mana leech.

A few standard skills this job entails are: Ruin, a skill which sends out magic damage at a power of over half percent; Summon and Summon ii, being able to call caster and tank type familiars to the scholar’s side in battle; Physick, a skill which allows for replenishing a party-member’s hit points; and Shadow Flare, causing an area of deadly-to-the-enemies magic shadows to appear. There are more, but these are just a few of the skills.

Some important statistics of this job include an enhanced intelligence, a restoring of the base hit points, and a shorter cast time. The better races for this job might be Hyur, your standard human race, the Elezen, your standard gaming elf race, or even the Miqo’te, cat-like human like creatures exclusive to Final Fantasy.

Suitability in reference to all types of PvpPand fast leveling is determined by magic ability and how well Scholars work in a party environment, as well as healing.