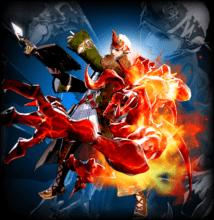 The summoners represent a long-since forgotten path where primals, beings such as Ifrit, Garuda, and Titan, are called forth and bound to their masters. Summoners have this unique ability to control the wild primals, however the people of Eorzea still fear this untold power. All but lost, the knowledge of summoners is some of the most vital in Eorzea, as only the beast tribes that roam Eorzea still have a similar power of unleashing these creatures upon the realm.

Summoners in Final Fantasy XIV: A Realm Reborn will be a vital asset to your party or if you are going on story line events by yourself, with the power to summon powerful beasts such as Ifrit, Garuda, and Titan. To become a powerful summoner to produce more powerful beasts at your whim, the class your character must choose has to be the Arcanist class.

The Arcanist Class uses a book as their weapon and summon magical creatures called Carbuncles to fight at their side. As your character levels up and continues to gain new statistics that apply to the Arcanist class, you will find yourself not only learning new summoning spells, but also mastering the Conjurer Class to become a Summoner for any Final Fantasy XIV team.

When you are a summoner, your character will have three base summons they can use: Ifrit-egi, Titan-egi, and Garuda-egi. The Ifrit summon is renown in Final Fantasy history as the spirit of fire while Garuda is the summoned spirit of wind and air. Titan-egi is a useful summon for earth-based attacks. These three summons will come to the summoner as an “egi” form to start. Other powerful summons the class can use are Leviathan, a water summon, along with Ramuh of lightning and the powerful summoning called Chimera.

The best race to choose for this job will be the midlander Hyur. While this race is the most populous, they are also the most avid readers. Midlanders place a high emphasis on education, reading, and culture; hence, they will become exceptional summoners for your needs. If you do not wish to use the Midlander Hyur for your Summoning needs and wish to use different races, then the Hellsguard Roegadyn will be another great choice since they are claimed to be masters of magic.