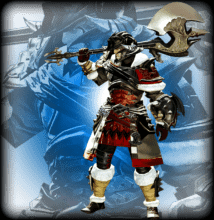 Once the front line soldiers that fought in the great wars that raged across the realm, these stout swordsmen are known across the land as the most fearsome of fighters. Born on the northernmost edge of Abalathia’s Spine, warriors quickly became respected for their powerful cleaving attacks delivered from their massive greataxes. Now more of an obscured profession than a respected talent, warriors still hone their skills in anticipation of the next time they are needed.

The Warrior class in Final Fantasy XIV is essentially a versatile tank that can be used offensively in certain occasions. I am providing a basic recommendation on how to get and use this job to beginners.

In order to acquire the warrior job class individuals must first be a level 30 Marauder and a level 15 Gladiator. Once they have reached these levels, they must return to the marauder’s guild in Limas Lominsa so that they may receive the quest “Pride and Duty.” Upon completing this quest they will be given “the Soul of the Warrior.” Obtaining the job class is as simple as equipping this item.

After players equip the soul of the warrior, they will be granted additional warrior skills. They will still be able to use all of the skills that they had as a marauder, as well as some pugilist and gladiator skills. The warrior’s skill set is also based on a stacking system, where the warrior must stack 5 units of wrath in order to use additional skills.

The first of the additional skills would be “Defiance.” Defiance increases the players maximum Health by 25% and lowers their damage dealt by 35%. The health increase is what makes the warrior class an excellent tank. This skill also begins the warrior’s wrath stack. The wrath stack will be lost once the player toggles defiance “off.”

The second skill gives the warrior the ability to attack well while still acting as a tank. This skill is “Inner Beast” and it delivers an attack with a potency of 260. It also ignores the 35% damage penalty caused by activating defiance. It also absorbs a portion of health. Inner beast can only be used while defiance is activated and it will consume any wrath that has been stacked up.

“Unchained” is the third skill of the warrior job class. Similarly, this skill nullifies the negative effect of “defiance.” It can only be activated while defiance is toggled on, consumes all stacked wrath and lasts for 20 seconds.

“Steel Cyclone” is a powerful attack that has a large area of effect. It is good for attacking groups of enemies and bosses. It delivers an attack with the potency of 200 to all nearby enemies. Also, like all of the other warrior skills, it ignores the 35% damage penalty of defiance and consumes all wrath units that the player has stacked.

“Infuriate” is the warriors final skill and it instantly grants 5 units of wrath and changes the players status to infuriated. This can only be used while defiance is active. It is useful because it surpasses the wrath build-up phase.

If the player is looking to engage mostly in team play, then I highly recommend the warrior class. That is because the warrior is a highly effective tank. However, if players are expecting to engage in more person verses person game play then a different class would better suit their demands.